The Sham trek follows the ancient trade route through the territory of the ancient kingdom of Lower Ladakh. This region lies to the west of Leh and has a lower altitude. Therefore it is generally known as Sham, which means "lower part".

The Sham trek is possibly one of the easiest treks in the Ladakh region, because the passes in the main part of the route (from Basgo to Temisgam) are below 3900 m. Therefore it is popularly referred to as a "Baby trek". It is a good trek for beginners and it can also be used for high-altitude acclimatization before more difficult trekking. The route from Likir to Temisgam covers a distance of less than 30 kilometers and takes about 3 days.

The trail runs through the barren mountains of changing colors, including shades of yellow, ochre, brown and maroon, with occasional patches of vegetation. A large part of the route is along motorable roads that receive thin traffic. However, you can follow the walking paths running on the mountain slopes, often matching with ancient trails. Between mountain passes, in a sharp contrast to the deserted landscape, the route goes through beautiful oasis-like villages containing streams, shady willows, orchards and barley fields.

All year round trekking season

The Sham trek is the only trek that can be done throughout the year, as there are no high mountain passes en route. While June-September is the ideal time for trekking, keep in mind that this is a busy season. Trekking in April-May or October-November allows to avoid both crowded trail and coldest winter temperatures. The Sham region typically receives little or no snow in these months, with lots of sun during the day. Also, April-May is the time to see apricot orchards in bloom. Trekking in winter months is a great opportunity to experience the village life of local people in harsh winter and to witness beautiful snow-dusted mountains. Winter trekking offers a chance to spot a snow leopard. Winter is also the time when some festivals take place, including the Dosmochey festival in Likir monastery and the Ladakhi Losar (New Year) celebrations.

The Sham region has a rich cultural heritage and centuries-old monasteries. The ancient kingdom of Lower Ladakh was located here, while Basgo and Temisgam were used alternately as capitals. The mud-brick fortress of Basgo dates back to the 14th century. The Tingmosgang castle in Temisgam was built by the Lower Ladakh king Dragpa Bum in the 15th century. Later, his grandson Lhachen Bhagan (1460-1485), the first king of the Namgyal dynasty, conquered the Upper Ladakh (located from Leh to Shey) and united these two parts, after which Leh became the capital of Ladakh. The important cultural landmarks of the Sham region are the Basgo fortress with Maitreya temples, Tingmosgang monastery (Drukpa Kagyu) and castle ruins, Likir monastery (Gelugpa), Rizong monastery (Gelugpa), Tserkarmo monastery (Drikung Kagyu) and Khatsa monastery (Drukpa Kagyu). Also, in Saspochey, there is an old ruined temple (dated to the late 12th century) containing the carved wooden sculptures and beautiful wall paintings survived.

The Sham route takes you through the picturesque villages of Basgo, Likir (Tarutse), Yangthang, Ulley, Hemis Shukpachan, Ang, Temisgam, Tia and Skindiyang, where the locals maintain a traditional way of life. Due to a mild climate and thick vegetation in comparison to other parts of Ladakh, the Sham region villages are among the richest in Ladakh. Since the villages are within a short walking distance, the Sham trek can be easily done as a homestay trek, which offers a unique insight into the culture and everyday life of Ladakhi family.

The Sham region is excellent habitat for urial (a species of wild sheep), ibex (a species of wild goat) and snow leopard. Urials (called shapoo in Ladakhi) can be seen in the surroundings of Yangthang and Hemis Shukpachan, Chagatse La and Phobe La passes. Ibex (skin in Ladakhi) can be seen on the high ridges near Spango La pass. Mountains of the Sham region are territory of snow leopards (shan in Ladakhi). Ulley, the highest village of the Sham trek, has become an important destination for spotting snow leopards in winter, when they descend to lower elevations. They will never show themselves in summer. However, near Ulley a trained eye may spot characteristic ‘V’ shaped scrapes at the base of cliffs made by snow leopard by raking the ground using their hind paws. Also you can occasionally spot wild dogs (dhole), wolves, red foxes and otters. The birdlife is also rich: redstarts, brown dippers, finches, partridges, golden eagle, lammergeier and many more.

The Sham trek is also known as Apricot valley trek. Due to lower altitude this region has a mild climate compared to other parts of Ladakh and hence it is well renowned for its plentiful apricot orchards (also containing apple and walnut trees). In Ladakh, the apricot is commonly known as chulli. The Ang village is particularly known for its charming apricot orchards. In April-May, the apricot trees begin blooming with white and pinkish flowers and give a unique, eye-catching look to the surrounding mountain desert. In July-August, the apricot trees are laden with yellow and orange fruits considered to be the sweetest in Ladakh, and possibly the world's finest ones.

Hemis Shukpachan is famous for having a grove of juniper trees. Name of the village is derived from the word shukpa (juniper). Fragrant junipers were widely used as incense in monasteries and unfortunately the number of junipers in Ladakh has declined over the years. The juniper trees are considered sacred by the local people and protected by the Forest Department. Another sacred juniper grove is located near Khatsa monastery (not far from Tia village) and it is believed to be the abode of Nagas. 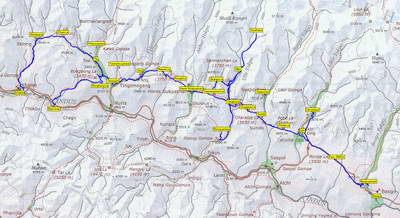